The Challenge of Glasgow by Gaslight


Saturday night I had the honour of making a guest appearance in Sarasvati Tribal's show the Gaslight Faeries at QMU, Glasgow University.

Gaslight Faeries was originally conceived for the Britannia Panopticon Music Hall - the oldest surviving music hall in the UK - as a show with a connected series of Fusion dance acts, each taking a little bit of inspiration from the era of the Panopticon itself (1857-1938).  The first performance of Gaslight in August packed out the tiny auditorium of the Panopticon in the Trongate, Glasgow, with many people turned away.   The show contained a mix of Tribal Fusion group and solo performances, with the addition of a sprinkling of comedy, burlesque and good old fashioned story telling that featured the Dragon Lady, Cleopatra, the Victorian Gent and Mata Hari amongst its characters. 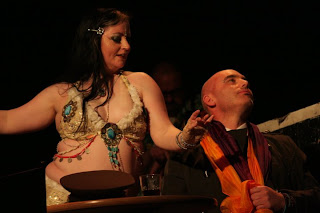 About 2 weeks before the Panopticon show premiered in August, Laura from Sarasvati got in touch to say that one of her guest stars had pulled out and ask whether I was willing step in.  The challenge was to create an act complete with music that would look and sound in keeping with the era that the music hall was open.  I accepted.  My first stop was Wendy Holyer of Wen-D Designs to set about creating a period costume.  We settled on the design for a purple silk Ghawazee coat and while Wendy slaved over the dress, I put together a Courtly Classical dance to Farid El Atrache's Kharamana.

Following the sell-out Panopticon show, the Sarasvati girls decided to do the show all over again and I was asked back for another guest slot.  With a little bit more time to prepare, I had the chance to rework my act.  As I've been learning and teaching a lot of rural Sha'abi style Egyptian Dance, this was the style that I had really wanted to showcase and I thought it would provide a real contrast to the rest of the show.  Also, whilst researching I found inspiration in a beautiful film from Serpentine video about the French World Fair in 1889 which described the first European appearance of the famous Ghawazee dancers.  I have studied Ghawazee dance accompanied by Sai'idi muscians during recent study trips to Egypt and this seemed like the perfect opportunity to present a dance and music tradition that goes back centuries, but is still performed (albeit rarely) in Egypt today.

I settled on my act, "L'Exposition Universelle" (the world fair), to evoke a time when thousands flocked to Paris to visit La Rue du Caire and gain a glimpse of the most unusual dancing you have ever seen.  But there was one further addition I felt I needed to add to the authenticity of the interpretation, sagat.  Sagat, the "metal castanets" described in Serpentine's film are always used by the dancers from the Ghawazee tradition and this was a skill I've always wanted to learn.  So I took the chance to practice and attempt to master the coordination of percussive fingers combined with strong hips.  And, although I wasn't yet entirely proficient at both at the same time, I decided to go for it for my performance on Saturday, at least to try to give a taste of what it might have been like to watch this dance in reality.

The result, well it wasn't perfect, but the performance went down well and contrasted with the rest of the show.  The Wen-D costume also worked well and characteristics of the dance, particularly the energy and strength in grounded movement were conveyed.  Here is a photo of the end result. 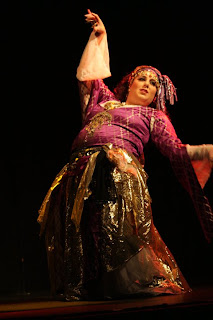 A big thank you goes to Laura and Sarasvati Tribal for inviting me as a guest performer.  It was really a pleasure to work with them.  Sarasvati Tribal is a group of 4 dancers from across Scotland, led by the talented troupe leader Laura Monteith, a well respected Glasgow based Tribal Fusion dancer, teacher and choreographer.  Gaslight Faeries is their second production, following Extraordinesque which debuted last year and played to audiences in Glasgow, Edinburgh and Peebles. 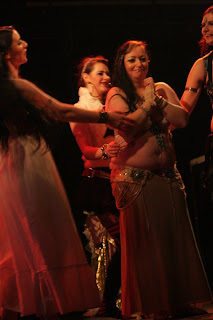 The photos are courtesy of Violet Shears.
Posted by Habiba Dance at 22:25