I've had a fantastic dancey weekend.  I previously blogged about the Big Dance weekend of dance, in Edinburgh Saturday 30th June to Sunday 1st July, connected to the London 2012 festivities around the country.

After Saturday night's eventful gig, I felt spurred to head down to the National Museum of Scotland on Sunday to take part in the bellydance flashmob, organised by Elspeth Swishandhips, as part of Big Dance Edinburgh.  Months of careful and planning and organisation went into this and Elspeth even filmed and uploaded tutorials of all the choreography so that as many people as possible could take part.

There were about 50 dancers, with Egyptian, ATS and Tribal Fusion styles all featuring.  With so many old and new faces, there was a fantastic buzz about the place and a huge crowd cheering us on - although I suspect not all of them were so unsuspecting.  Congratulations Elspeth, it was a fantastic event and thank you for all your hard work! And well done to all the dancers who took part!

Here we all are dancing in the Museum's spectacular surroundings (thanks to Norma for the photo): 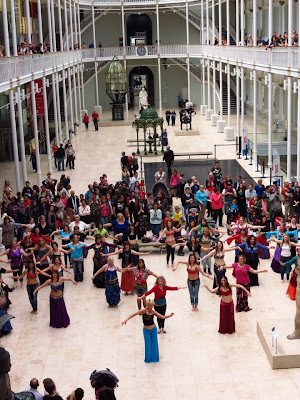 Big Dance events were taking place all over the city.  Here's my shot of Fife based ATS teacher Elaine giving a taster in the Museum, a bit later on: 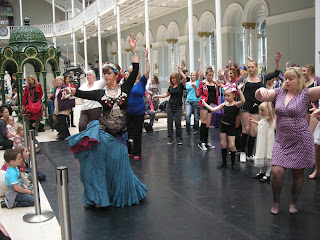 And here's my shot of amazing double sword dancer Briar from Edinburgh troupe Twisted Tails under the shadow of Edinburgh castle. 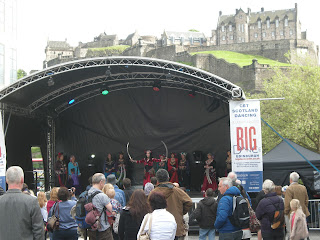 At the end of the day, I even found myself chatting to someone in the crowd who felt inspired to start a new dance class.  Well how about that then for a successful way end to a weekend aimed at getting people dancing?

Here is Emma's video of the flashmob in all its glory: