A spring in my step - inspired dancing to live musicians

I'm just come back from Spring school, feeling inspired by the music and stars of the Golden Age.

Spring School is a course for Professional and Advanced dancers, run by Juliana Brustik and Judy Hammond, two of the senior teachers of the Raqs Sharqi Society.

This was set in the grounds of Haileybury College, a Hertfordshire boarding school with an uncanny resemblance to Hogwarts.  I joined a group of 24 women for four days of intense training including body work, improvisation, performance skills, video, tabla and dancing to live music. 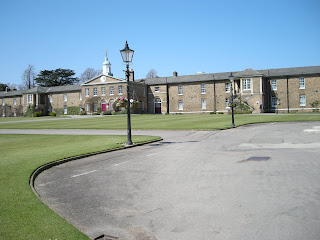 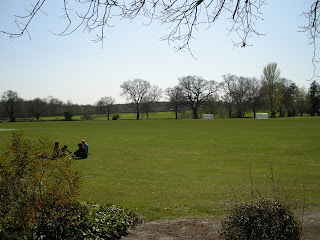 This year we explored classical Egyptian Dance, drawing heavy influence from the stars of Egypt; Samia Gamal, Tahia Carioca and Naima Akif, from 1940s and 1950s era of Egyptian cinema.

I arrived on the Wednesday evening, just in time for dinner in the College's vast dining room, and this was followed by a welcome and relaxation session led by Judy.  This helped me to get into my body and spine, preparing it for the work to come.

Thursday morning was an early start. Thankfully after a cooked breakfast the first part of the warm up was mostly lying down - some relaxation followed by gentle movement to awaken mobility in the torso, joints and limbs.  Following this, we broke into twos for a quick standing massage, which to helped me to feel tall whilst still connected to the earth.  And after this we started to dance.

Juliana and Judy made an efficient teaching tag team with seamless handovers to take us through the morning workshop. We worked on steps to create flow in the classical dance, we moved around the room, weaving and allowing the spine to lead the movement in the upper body and arms.  Samia Gamal leg lifts and turns were Incorporated to add drama to the dance, and then we focused on a single piece, the first part of Nebtedi Menen el Hakaya - a beautiful Abdel Halim Hafiz song by Mohammed Adel Wahab.  The music was taken from the new live recording "Hommage a Mohamed Abdel Wahab". 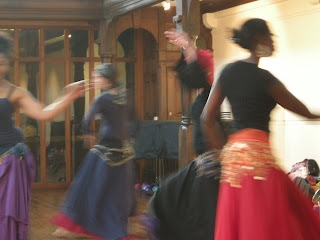 In the afternoon, we were split into two groups.  I went along for the workshop with Judy which was all about the spine.  This is always the central theme in Judy's classes, a teacher with training both in Raqs Sharqi and Alexander Technique, with over 20 years experience.  It was good to explore the movement coming from the centre, as we worked with the support of a partner to find the dance and express the music with upper body.  The addition of small balloons, held in the palm of our hands for part of the workshop, made an interesting prop that reflects a somewhat experimental approach to teaching.
After dinner,  I took the chance to go to a tabla (darabuka) class with Tim Garside, one of the foremost Arabic style percussionists in the UK.  Tim taught with a great deal of patience and a touch of deadpan humour.  With the din that we created, I couldn't even hear what I was playing (probably a good thing), but it was certainly amazing fun.  After this, there were videos to watch in the common room and a chance to relax and have fun with the rest of the girls - and I even came away with some really handy tips from some of the other teachers on the course. 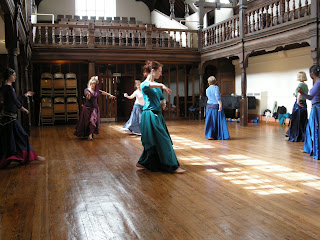 Friday took the same format as the previous day, but in the afternoon I attended Juliana's workshop.  We started in the common room in small groups analysing and interpreting video footage of Samia, Tahia and Naima.  Then inspired by the greats, we put on some more glamorous attire and went through to the dance hall to work on the playful and sensual side of the dance.

Friday night was party night, but before that was our second tabla class where we put together a short group performance for later on, we made quite a sound.  Tim played Tabla for us at the party, and and a few of us took a turn to perform a piece.  Highlights included a lovely duet between Kim Hall dancing to her 12 year old daughter Poppy playing tabla and a beautiful duet from Italian dancers Federica and Paolo.  I also really enjoyed Lise Szwann's stick dance, Pauline Blackwood's classical piece, and a hilarious character piece by Maggie.  I performed too and with no chance to practice beforehand, chose to improvise to Tahtill Shibbak - one of my favourite songs.  I really enjoyed dancing to such a supportive audience.

Saturday morning we awoke in eager anticipation for the arrival of our musicians, Emile Bassili on violin, Gamal Awadi on keyboard, Abdul Sahklam on oud and Tim Garside on tabla and reqq.  And with a bit of persuasion Gamal's son and Poppy also joined in the percussion.  A six piece ensemble, playing just for us!  The musician's played Nebtedi for us and we practiced the moves we learnt earlier in the week, with Juliana leading us through the dancing.  We also danced to some out of this world violin and oud taqsims.

In the afternoon there were some solo opportunities and I took the chance to improvise a small solo.  As I've never had the experience of dancing to live oud before, I selected to dance an oud taqsim.  I let the gentle tones of the oud music inhabit my body and experienced the interaction between dancer and musician.  Wow, what an incredible and exhilarating experience!

This video of Juliana leading the dancing shows a small window into the day:


www.habibadance.com
Posted by Habiba Dance at 14:24