It wasn't meant to be a New Year's Resolution, but since January I have been learning Arabic.  And the whole experience has just been so rewarding I want to share something about what I have learned so far.

I had a pretty bad experience learning languages when I was at school and it's not something I ever thought I would be able to do.  Several years later, as an adult, I faced my fear and started going to beginners French classes.  I found it very motivating to learn at my own pace without the school environment and I stuck at it.  We're not talking complete fluency, but after about 3-4 years of study I found that I could pass pretty well in France and Belgium using what I had learned.  A little bit after that, I built on my knowledge of French and even managed to teach myself to speak a little Italian too.  So why all those years spend thinking I couldn't do languages?  Just like learning any new skill, whether languages, dance, or anything there simply isn't a good or bad at, there's only learning in the way that suits you.

So what about the Arabic?  Well I like the sound of it, I love the music and the songs.  And when I listened to the music and read song translations I found I could start picking out the words that I recognised and some of the basic patterns in the language.  I thought about going one step further and learning it properly.  Yes Arabic is very different, but could it really be so difficult?

Around the turn of the year I had some happy accidents.  My friend posted a Facebook link to the You Tube channel Learn Arabic with Maha - containing a charming series of videos being made by an Arabic language teacher who had started teaching her Italian husband.  At the same time, I spotted a set of Beginners Arabic Adult Evening Classes run by the local council, starting that very week.  And all of this perfectly timed to happen right before the holiday to Egypt I had already booked.  All the pieces fell into place at the same time.  So with no reason to hold myself back I plunged in. 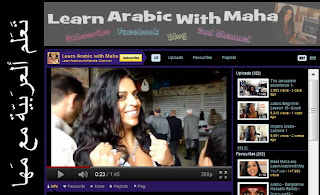 I want to say more about the different ways that I have been studying in a bit more detail, but I will have to come back to this at some point soon.

It has been over 3 months now and I've been studying hard.  I won't be sure how much has actually sunk in till my plane actually lands in Cairo.  But I am very hopeful and I really do think, Insha'allah, that I will have something to say.

www.habibadance.com
Posted by Habiba Dance at 23:43