Night of the Zar - the best of traditional Egyptian music

Makan, meaning the place in Arabic, is a small performance space in Downtown Cairo, by Saad Zaghloul metro, that holds regular concerts of live traditional music from the Egyptian Centre for Culture and Art (ECCA).
The ECCA seeks to safeguard Egypt's rich musical heritage and oral tradition, researching, documenting, preserving, showcasing and celebrating some of the increasingly rare musical forms - both returning them to the Egyptian people and sharing with the world.
One of the true highlights of my recent visit to Egypt, was a night at Makan to see the Mazaher ensemble, presenting the music of the Zar.  In its original form, the Zar is a healing ritual, one of the few, ancient healing ceremonies performed mainly by women for women. Zar is meant to pacify spirits and to harmonize the inner lives of the participants. A small circle of women gather with the aim of communicating, through music, song and energetic movements, with unseen entities or spirits.
Zar is a part of the underground culture and the practice of Zar in Egypt has nearly vanished.  In the whole of Egypt only around 25 people continue to practice this knowledge and this tradition.  The musicians of the Mazaher ensemble, Umm Sameh, Umm Hassan, Nour el Sabah are among the last remaining Zar practitioners in Egypt and they perform regularly at weekly musical evenings hosted by Makan. 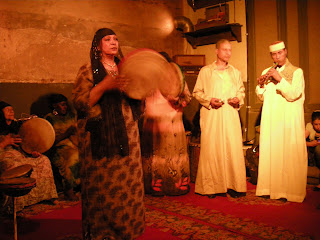 This was a small, and intimate setting, with great acoustics and space for an audience of perhaps 60 people, made up of young and old alike, both Egyptian and foreign.  The show itself was an evening of stunning music with beautiful vocal melodies and energetic rhythms that could penetrate your entire being.  The lead singer had amazing charisma and with a glint in her eye she wove an interplay of gentle humour and deep emotion, which was both captivating and incredibly moving.

Here is a small clip that, although cannot possibly do the music justice, at least shows you something of the atmosphere of the place.  The song was one of the audience favourites - Banat el Madrassa.


This second very short clip, shows two musical instruments featured in the Zar - the tamboura (a six-string lyre) and the manjour (a leather belt sewn with many goat hooves).


We helped ourselves to a cup of traditional tea during the interval and spoke to the Egyptian girl sitting next to us.  She had attended this concert for the first time only a week earlier, and already she had come back to hear more.  I now feel I need to plan my next trip to Egypt, so that I can do the same. 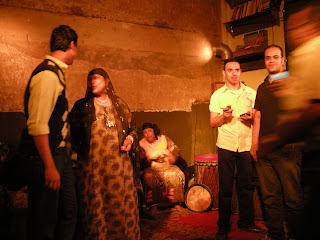 Descriptions of the Zar ritual and Mazahar ensemble used in this blog entry are to be credited to the Egyptian Centre for Culture and Art.

If you want to receive regular updates from this blog, you can subscribe by email.

www.habibadance.com
Posted by Habiba Dance at 01:18